The Hacker Steve Chronicles, and Other Works

When I was 14, I wrote a short story called “Hacker Steve.” The titular character, whose name and hobby I'm sure you can surmise, was a college student who loved using technology to play pranks on authority figures. I had no idea how college worked but I assumed, from films, that much of it involved pranking “the Dean.”

The story was terrible:

The "Net"! Gotta take down those Telnet sites on the Net!

Of course, no story you write when you're 14 ever has value, except to solidify your own delusion that you are a writer and that somehow makes you special. So Hacker Steve was born and died on the page and I eventually went off to college. Disappointingly, I didn't prank any Deans, though I did once anonymously inter-office-mail a banana to an Assistant Registrar.

Around then, I started drawing comics to amuse friends. One series, Diamond Find, went on to be the basis for a gigantic interactive game. Others had less staying power, but were still funny in their own right:

All of my comics, however, suffered from a lack of artistic training and, worse, a certain sloppiness of lettering. Drawing in pen also brought its own challenges, namely that any mistakes had to be incorporated into the comic, because I was not going to start over.

Still, with a bit of patience and zooming in, you may be able to have some laughs. “Slime & Oliver” is particularly messy, but a personal favourite:

The ill-mannered slime has its own ideas about coolness.

A few years after college, when two friends who'd always liked the comics were getting married, I got an idea for the ultimate wedding gift. I had a blank notebook with 25 pages, and I thought: could I fill this with comics before the wedding?

Half of this is just theme song.

“Her Secret Refrigerator” had a couple of follow-ups, and I got two pages out of “Executive Error,” a dark comedy about workplace typographical mistakes. Trigger warning for CEO suicide.

The only good CEO etc etc.

It was fun to draw a plover on the widow.

As a diversion, I branched off into visual poetry, writing a story about life in the forest with animal friends:

Still true after all these years.

And who can resist the charm of “Tradesperson and Dinosaur,” the Mario/Yoshi send-up? Tradesperson only cares about his work, and Dinosaur is a terrifying, unstoppable carnivore.

I did succeed in filling the book, and Black Ink was well-received by the couple. I'm not saying all the comics were good, but at least the book was full, and I'd been able to disguise many errors. 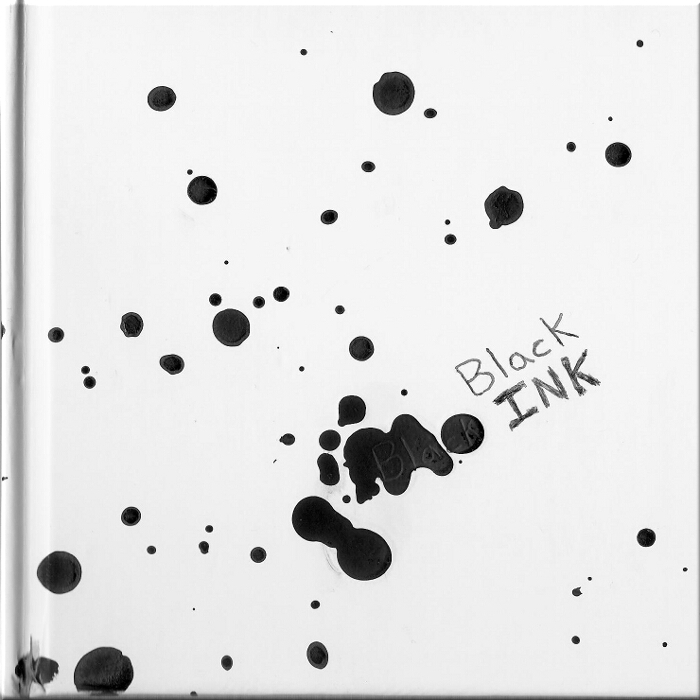 I had to re-do the title when I accidentally ruined it with the eponymous ink.

I needed a break from drawing after that, but soon got the itch again. This time, I wondered: could I make money off comics somehow?

A new business idea was born – a subscription service where I would mail you a comic every so often (drawn on premium silver card stock), but also, maybe, a real silver coin?

The less said about that business strategy to my accountant, the better.

With more ballpoint pen confidence this time around, I got more ambitious. I scribbled over much of “Pantry” for atmosphere, which I guess is just shading, but still felt pretty advanced at the time.

The joke is, the daughter hates quinoa.

The subscription idea didn't make me any money, and I even lost a fair bit, thanks to all the silver. Plus, forcing myself to produce quickly is a bad recipe for comics. Most were straight-up not funny, and others were a little too off-the-wall.

At this point I was clearly falling apart mentally, and the comics were reflecting that. “Curator” is practically autobiographical:

Scraping the bottom of the barrel, I began to think back to old ideas that I could mine for characters and/or punchlines.

Then I remembered... Hacker Steve. He would have a new life after all. And this time, I would know more about college.

I present in its 5-episode entirety:

The first comic establishes the characters of Steve and one of his nerdy roommates, Eugene. They have hacked a thing and it's coming back to bite them.

The suspect list for that class was pretty small.

Ahh, classic Steve. In this character I captured the essence of my original story, but without 5,000 words of convoluted remote-control prank description.

It starts to go off the rails in the second episode, which is itself just an extended Stephen King reference. It introduces Steve and Eugene's third roommate, Gerald, and is extremely wordy. I guess I had a lot to say here.

You knew SOMEONE's hand was going to get degloved.

It's alluded to, but Steve is doing some weird hacking experiments that no one seems to understand. Luckily, he knows what he's doing? Maybe a bit too well.

The microwave is the key to hacking deep.

Indeed, killing off the main character in the third comic doesn't bode well for the staying power of the series, but I had a plan to tie it all together.

Pull yourself together, Eugene.

Has Steve returned? I guess we'll never know for sure. But certainly his roommates live on to have more adventures without him. In this spinoff, Gerald and Eugene take things to the streets:

And so ends the Hacker Steve Chronicles.

I don't draw comics very much anymore, because it's clearly not what I'm meant to do with my time. But do I regret sinking so much into them? Of course not.

Well... maybe I regret this one a bit.

Things I should have done differently when writing "Ghostcrime"